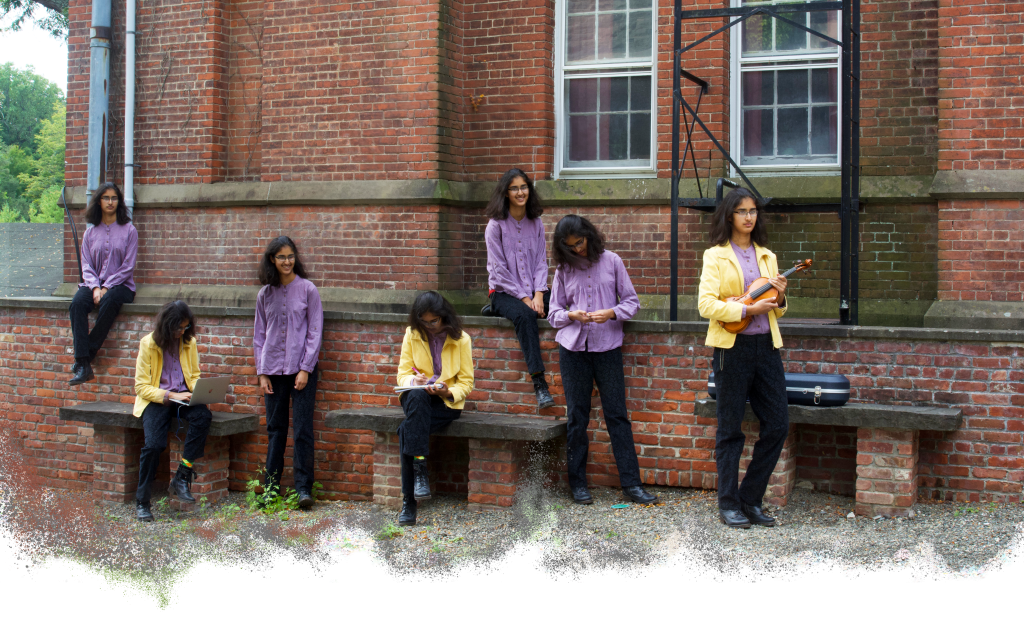 Who is Manar Hashmi?

Manar is primarily a composer. She is also a violinist, writer, and creator.

Manar Hashmi’s compositions have been lauded as “delightful,” “action-packed” and “refreshingly unique.” As a violinist, she has touched many audiences with her performances of music ranging from Vivaldi and Bach to popular songs. For Manar, open-mindedness and exploration are key to being a well-rounded and fulfilled musician.

Writing music is the thing that connects Manar with the creative power of existence in a way that nothing else can.

Starting in elementary school and throughout high school, Manar was very active in the music scene, directing the school orchestra at times and mentoring student musicians in the interpretation of her own compositions.

It was when she was playing the pieces she wrote herself among her fellow student musicians that she knew that composing is her life’s work.

Manar writes music of varying styles, whose influence ranges from Baroque harmonies and rhythms to ideas of the twentieth and twenty-first centuries. Her projects have included vocal and instrumental scores for films, plays, musicals and the concert stage. Manar has experience staging an original compact musical with her own libretto, as well as conducting original chamber music. She has written music for productions of the plays Twelfth Night, She Kills Monsters and Silence! The Court is in Session. Most recently, she has begun composing and performing music for violin and electronics.

Bold strings and a vivid palette of percussion are hallmarks of Manar’s compositional style. She gravitates to the large orchestral sound and rich, dark textures. She records her own percussion samples from everyday items—carrots, beans, lamp switches and other exciting sources of music.

As a producer of her own music, Manar continues to be amazed and inspired by the power of music technology. She has experience using Studio One, Garageband, Logic, and Digital Performer.

Manar’s work as a composer takes considerable influence from her experience as a performer. Throughout the years, Manar has developed an eclectic taste and a love for connecting with other musicians through shared performance experiences. Having been playing violin since the fourth grade, Manar has had time to participate in a wide range of musical activities, from being first violinist for Purcell’s opera Dido and Aeneas to being in the pit orchestras for productions of A Chorus Line and The Sound of Music. She has performed music for a ballet, played a period instrument in a Baroque orchestra, and played in a pop band. She started seriously developing her inner violist when she performed on the viola in a movement from Mendelssohn’s String Quartet Op. 13. This season, she continues performing on the viola whenever she is needed, such as in performances of opera classics and a program of Baroque music by women composers.

Her work to create that series of events was what earned her an invitation to play in a historically informed Baroque orchestra. Playing on a period instrument was key to Manar’s development as a performer of Early Music and as a chamber musician.

As she looks forward to a lifetime of collaboration with great artists and connection with great audiences, Manar is thrilled to contemplate the vast collection—centuries’ worth—of musical knowledge that she can learn from and be inspired by as a composer and instrumentalist in 2022.

Manar Hashmi was a winner of the 2020 Noteflight/El Sistema USA Call for Compositions Contest. To watch the video of her performance of her winning submission click here.

She was also a finalist in the 2022 Aliénor Harpsichord Commission Competition.

Manar was a recipient of the National School Orchestra Award.

Most recently, Manar was a finalist in the Coventry City of Culture Composition Competition.

We use cookies on our website to give you the most relevant experience by remembering your preferences and repeat visits. By clicking “ACCEPT ALL”, you consent to the use of ALL the cookies. However, you may visit "Cookie Settings" to provide a controlled consent.
Cookie SettingsREJECT ALLACCEPT ALL
Manage consent

This website uses cookies to improve your experience while you navigate through the website. Out of these, the cookies that are categorized as necessary are stored on your browser as they are essential for the working of basic functionalities of the website. We also use third-party cookies that help us analyze and understand how you use this website. These cookies will be stored in your browser only with your consent. You also have the option to opt-out of these cookies. But opting out of some of these cookies may affect your browsing experience.
Necessary Always Enabled
Necessary cookies are absolutely essential for the website to function properly. These cookies ensure basic functionalities and security features of the website, anonymously.
Functional
Functional cookies help to perform certain functionalities like sharing the content of the website on social media platforms, collect feedbacks, and other third-party features.
Performance
Performance cookies are used to understand and analyze the key performance indexes of the website which helps in delivering a better user experience for the visitors.
Analytics
Analytical cookies are used to understand how visitors interact with the website. These cookies help provide information on metrics the number of visitors, bounce rate, traffic source, etc.
Advertisement
Advertisement cookies are used to provide visitors with relevant ads and marketing campaigns. These cookies track visitors across websites and collect information to provide customized ads.
Others
Other uncategorized cookies are those that are being analyzed and have not been classified into a category as yet.
SAVE & ACCEPT